Are you working up the courage to tell your family and friends that you’re taking Automatic Driving Lessons?

Perhaps you already did, and did they look at you like you’d just deliberately infected yourself with an horrific, disfiguring disease?

Make a post on Facebook about looking for an Automatic Instructor and some Manual Instructors who are, well, shall we say, under performing, possibly a little bit shit at their jobs, and not too great at getting passes, (yes we know who you are,) will even privately message people wanting Automatic attempting to dissuade them from doing so.

It’s a shame that in such a modern age that there is still so much negativity about learning to drive in an Automatic.

You literally have to ‘come out’ as an Automatic Driver!

Just what the hell is wrong with some people??

If someone says that they want to learn to ride a motorcycle, do you get the same amount of crap?

Do people say BUT YOU CAN ONLY DRIVE A MOTORBIKE.

So why should folk go on that way about learning to drive in an Automatic?

It’s about choice, not that you’d think that, by the way SOME people go on about it.

DrewMatic have grown so quickly, we’ve been really, really lucky, and now that we’re currently the largest of Automatic providers, many of the established driving schools are now getting Automatic Cars, when just a matter of months ago, several of them were sneering at us.

Once some them saw that we were really making it work, they quickly followed suit.

There are even a few of them that are copying even more of what we do with our Pass Boards !

(Yeah, we’ve seen you with your massive Bill Board sized Pass Boards haha !!)

Recently, I was shown an article in a National Newspaper that was doing just that.

They were quite clever about it, they start by saying ‘most’ people drive Manual and that it was the ‘normal’ way of learning to drive.

See what they did there?

Are you being ‘subliminally’ dehumanised- made to feel less ‘normal? ‘

We all like to be part of the ‘most’ and ‘normal’ crowd don’t we?

Nobody likes to be part of the ‘less’ ‘laughed at’ and ‘abnormal’ crowd.

But there you have it, less than a paragraph in to the article and they’ve already made you feel less and abnormal.

I wonder who sponsored that article?

The list goes on, they say “most people pick it up after a few hours.”

Again, they’re trying to make you feel less than normal, OR, if you’ve never driven before, but were thinking about the Automatic Route that it’ll only take you a few extra hours.

I doubt somehow the journalist writing the article, was, is, or ever has been an Approved Driving Instructor, so really, how would he know?

Infact, they go to great lengths to dissuade you from having anything at all to do with an Automatic!!

They say if you pass in an Automatic then your licence will be called “A Category B Automatic Licence.”

In reality, on the back of the licence you have to look VERY closely to be able to differentiate whether or not your licence is Manual or Automatic. 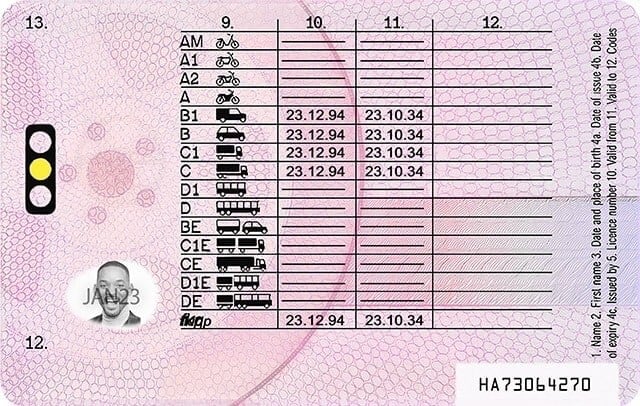 Can YOU tell if this is Manual Or Automatic?

Hardly a CATEGORY B AUTOMATIC LICENCE mark of ‘shame’ emblazoned across it is there?

Do you see now what they’re doing? They’re making you feel, well, shit- about driving an Automatic.

It makes you wonder, doesn’t it?

Whom it was that paid them to write that article?

In the USA they’ve been driving Automatic for DECADES.

Almost every car now is available in the Automatic Variant.

Year on year the number of people taking their test in an Automatic is increasing.

With the onset of Electric, Hybrid and Hydrogen Fuel Cell powered vehicles ( they’re ALL Automatic by the way) and the push to make cars non polluting, the industry is realising that Automatic IS the future.

Most Driving Instructors, some grudgingly, will tell you that even they can see how things are turning Automatic, look around, more manual driving schools are investing in Automatic Tuition Vehicles

There will always be a choice for anything that we do in life.

Learning to drive is one of them, so why the very F**K should Automatic Drivers be made to feel like they’ve made the worst choice in the world?

If YOU encounter any prejudice, tell them to respect it and if their bigoted minds cant, offer them a nice big cup of STFU !!

THE MYTHS AND THE REALITY

Second hand car prices are about the same and autos will have less maintenance problems as the engines and transmission will not have been worked so hard.

Autos are less likely to go wrong because they have less moving parts and often have a fluid clutch.

This is just nonsense.

Most garages are equipped to deal with repairing automatics

“They use more fuel” FALSE

We find people use more fuel in a manual drive car because the auto will change gear for you at the best time.

New developments mean modern autos allow you to have mush more input and can control which gears are selected.

Most will allow you select different power settings like Sport or Normal or Smooth or Snow/Ice especially for icy conditions as well as being able to prevent the auto changing gear if conditions dictate.

But for most of normal driving we just select D and off we go.

There are now triptronic automatics where you can either let the auto decide to change gear for you or you can take charge and change gear yourself at the touch of a finger.

The possibilities and options have never been greater and passing in an automatic now means you can also drive an automatic AND change gears if you want to, as well. So you actually have more choice than someone who drives a manual drive car.

“I like to change gear and be more in control of what gear I’m in” Yea- we just covered that. In A Semi Auto you CAN choose the gear for yourself IF you want to. Automatic Licence holders can drive Semi Automatics.

Have you seen a modern automatic?

There are so many varieties the mind boggles.

Say you choose an Auto with triptronic or Semi Automatic gearbox, you can control exactly what gear you want to be in with a Semi Automatic!!!

Yep, if that’s all YOU want to drive, then why not??

If you pass your test on a Motorcycle, all you can drive/ride is, erm, MOTORCYCLES.

BUT BUT….. IT’S REALLY HARD TO FIND AN AUTOMATIC. FALSE

You aren’t looking hard enough then, try Autotrader, Gumtree, Local Garages, amongst others.

BUT BUT….. It costs more to learn in an Automatic. FALSE

Traditionally, Auto lessons are more expensive, but you pass way faster, so once you spread the cost out over the shorter length of time it takes you to pass in an Automatic versus the time it takes in Manual, it’s actually cheaper.

BUT BUT….. If you pass in a Manual you can drive both.

What if you don’t want to pass in a manual, what if all you want is Automatic – that kind of kills that argument, doesn’t it.

BUT BUT…. What if your work wants you to drive a Company Car?

Oh dear, they’ll just have to hire an Automatic won’t they! Problem solved.

BUT BUT…. The list goes on and so do the incoherent arguments against………

So there you go, driving an auto these days means you can get on the road faster, need less lessons, enjoy your driving and be safer.

You can let the car do the gears or you can do them yourself.

If you hire a car abroad you’ll find more automatics than ever, just try and get a manual car in the USA!

Automatics are becoming even more popular now, especially as our roads become more and more congested and the number of hazards we have to deal with increase daily. The money you save on lessons could be better spent on having fun or maybe buying a better automatic when you pass.

JUST A FEW MORE OF THE PLUS POINTS

There’s a lot of them but, most of all, you can be on the road and driving MUCH quicker in an auto.

Things that seemed insurmountable problems in a manual are a breeze in an auto.

Once you pass your test then you will have learned already what we call the “head skills” of driving and if you want to change over and take a manual car test later then it would be a mere formality where you would most likely need no extra tuition, though why on earth would you?

Ask any of  the 100’s of students who have passed with DrewMatic in the last 3 years if they’ve experienced any of the above.

They’ll all tell you they are now in better jobs, more independent, happier and they all did it way WAY faster in an Automatic.

But what do they know eh?

Cos Your Partner….Knows better. FALSE

Cos Your Family….Know better. FALSE

Cos Your Colleagues….Know Better. FALSE

Pass in an Automatic and they’ll still beg you for a lift. TRUE

Pass in an Automatic and they’ll still ask you for favours. TRUE

If all that you want to do is drive- then do it in an Automatic. TRUE